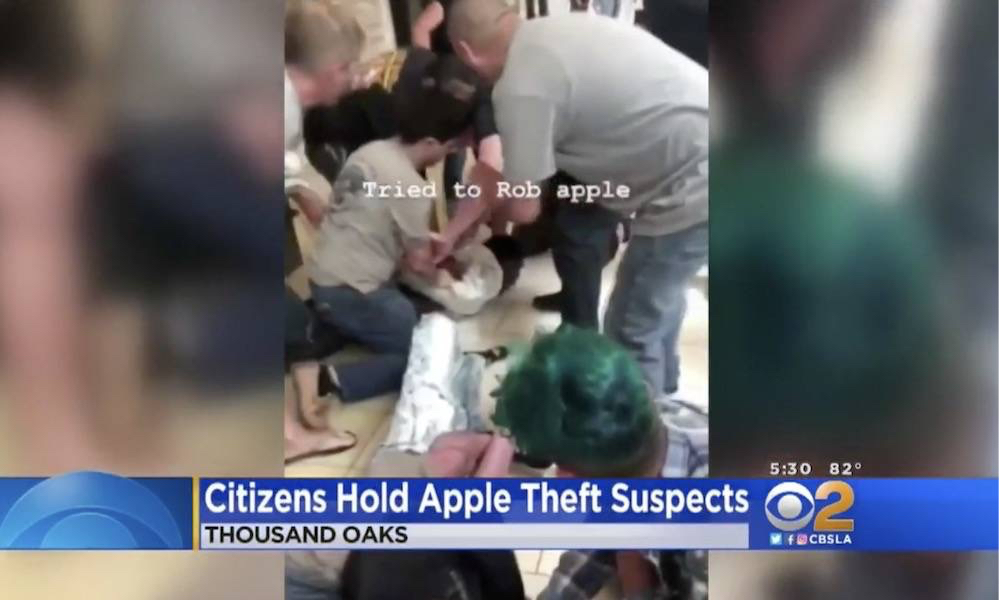 By Mike Peterson of iDropNews

Thieves who raided an Apple Store are now in custody after customers helped take them down during a robbery in Southern California.

The incident began like many Apple Store heists. Three men entered the Apple Store in Thousand Oaks at about 3:17 p.m. on Sunday and began to take several items, including iPhones and Macs worth about $18,000 in total, according to the Ventura County Sheriff’s Office report.

But unlike the majority of Apple Store capers, the robbery in Thousand Oaks ended quite differently.

As the thieves attempted to flee the store, they ran into a “juvenile female customer causing her to fall to the ground,” authorities said.

Two of the bandits were then tackled by regular Apple Store customers — who held them down until police arrived.

The third suspect, who managed to escape the store, was arrested separately when his car was pulled over by authorities. Two other alleged accomplices were in the getaway vehicle and were also detained.

All in all, five suspects were arrested. They were charged with burglary and conspiracy to commit burglary, police said.

Police believe the band of thieves may be tied to other Apple Store robberies across California, including a heist in Northridge earlier that same day, KCAL reported.

Four of the five suspects are from Northern California, while the fifth was from Fresno.

Brick-and-mortar Apple locations have been hit across the state of California since the spring — including a recent one in Roseville, California earlier this month in which thieves made out with $20,000 of electronics.

Apple Stores have become popular targets for robberies in recent years, likely due to the expensive electronics within. Bandits regularly pilfer upwards of $20,000 worth of products from these locations.

Most of these robberies play out the same way. Thieves will rush into a store, take Apple products by severing the security tethers, then flee just as rapidly. While sometimes caught on surveillance footage, the speed and aggressiveness of the robberies have made catching the suspects difficult for police departments.

While the Fresno robbery could have played out the same way, the Good Samaritans who were present quickly put a stop to that.