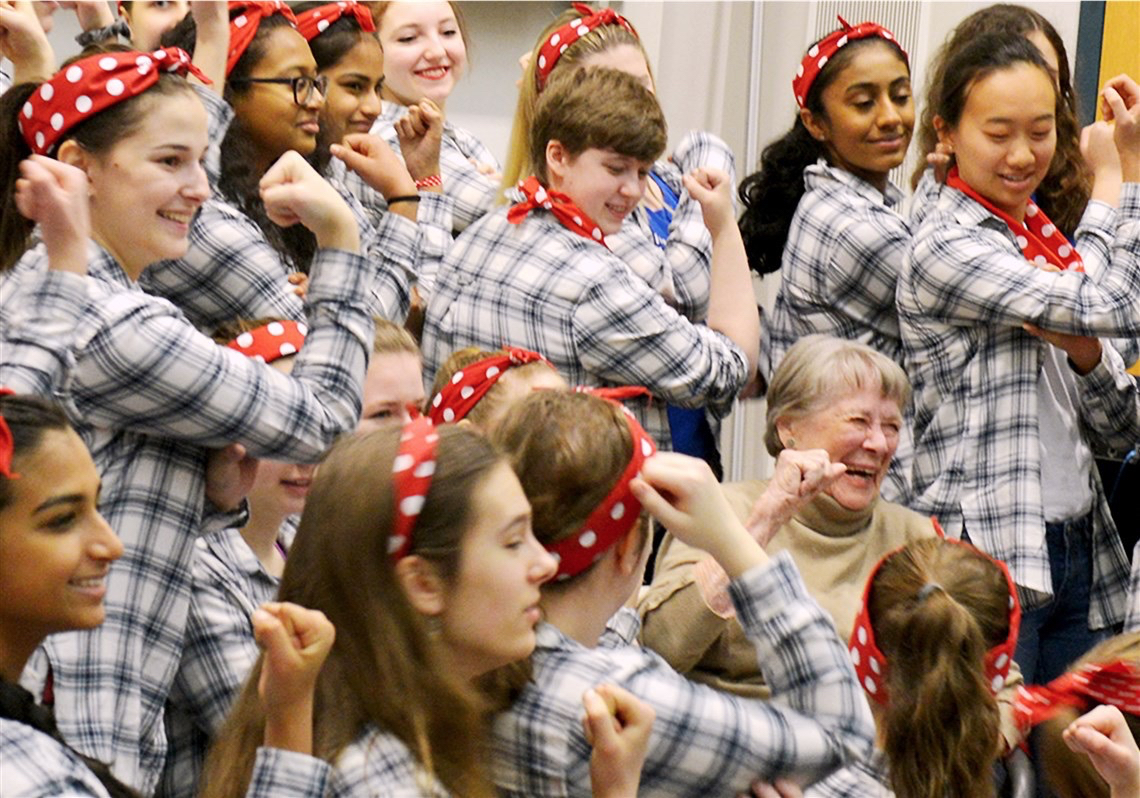 When Julia Parsons left Carnegie Tech with a humanities degree in 1942, her career seemed prescribed: Women at that time were educated to work as secretaries, nurses, costume designers, homemakers.

But with World War II raging and all the men in the armed forces, “I thought, there’s got to be more I can do,” Ms. Parsons, 96, recalled. “I wanted to go in the service, too.”

It was the can-do spirit — plus a couple years of German language classes at Wilkinsburg High School — that landed her an elite and highly classified job among an all-women team of code-breakers in the war effort. From a Washington, D.C., communications complex run by the Navy, she helped to unscramble messages that helped turn the tide of the war.

Ms. Parsons, who after decades of secrecy began sharing her dramatic story in recent years, had a rapt audience in a Carnegie Mellon University lecture hall on Saturday: a few dozen teenage girls, dressed in jeans, plaid shirts and red polka-dot bandannas — a la Rosie the Riveter, the famous illustration depicting the strength of the female workforce during WWII.

This was a gathering of the Girls of Steel, the all-female high school robotics team sponsored by CMU’s Field Robotics Center. Since its founding in 2010, the group — whose logo is Rosie the Riveter with a robotic arm — has grown to more than 50 girls from the Pittsburgh region who build robots to compete in regional, national and global competitions.

It was a place where Ms. Parsons’ message resonated across more than seven decades.

“It was awesome to see her experiences and how they similarly reflect experiences we have — but in a different time,” said Corinne Hartman, 18, a senior at the Ellis School in Shadyside, who sat front and center in the lecture hall. “She was working with a group of women who worked together to help do this really big awesome technical thing.”

Ms. Hartman said she came to the Girls of Steel after trying several STEM summer camps at which she was the only girl.

“I felt like my ideas or opinions weren’t being heard, that I didn’t have a place there,” she said. Once she joined the robotics team, “I absolutely fell in love and have been here ever since.”

In Ms. Parsons’ time, a woman’s path to find technical work was even more uphill.

Right after graduation, she worked briefly for an Army ordnance laboratory, fixing gauges that were used in steel mills to produce shells and ammunition. It was a job that women got, she admitted, only because there weren’t enough men. “Pittsburgh was pretty much devoid of men” between the ages of 18 and 40, Ms. Parsons said. “All of them went.”

The work on ordnance gauges was “pretty boring,” she said, and she quickly enlisted in the Navy. She shot up her hand when a recruiter asked if anyone knew German.

Before she knew it, she was part of a team working three shifts, round the clock, trying to crack the code of intercepted German messages sent over radio waves by ships and submarines.

It was extremely difficult work, even though they had the German-made encryption machine, known as the
Enigma, and some of the code books, which the British had secretly recovered from a sinking German submarine years before.

Just months before the war ended, Ms. Parsons worked for days to assemble a spreadsheet of all the messages and noticed something. The Germans had sent the weather forecast every day at the same time — a crucial mistake that allowed the women to decode a slew of messages and that helped track down an elusive German submarine.

After the war ended, she wanted to keep serving but hit an unexpected roadblock: She was pregnant. That fact ended her military career, she said. “Now, there are maternity uniforms,” she joked.

So she came home, raised three children and taught English at North Allegheny High School. She told no one of her code-breaking experience, not even her husband, until she found out in the 1990s the government had declassified the team’s efforts.

At the end of her talk, Ms. Parsons had just as many questions for the girls as the girls had for her. “How do you get into this?” she asked them. “Do you know enough about robotics to know what you want to do for a career?”

A key difference, of course, is the publicity of the mission.

“We try to get ourselves out in the community,” Ms. Hartman, the high school senior, responded. “This has shown me I want to continue doing robotics in the future.”

What do think of the future of robotics being female? Tell us about it in the comments below!