It’s not all about money and greed. No Really, it isn’t. 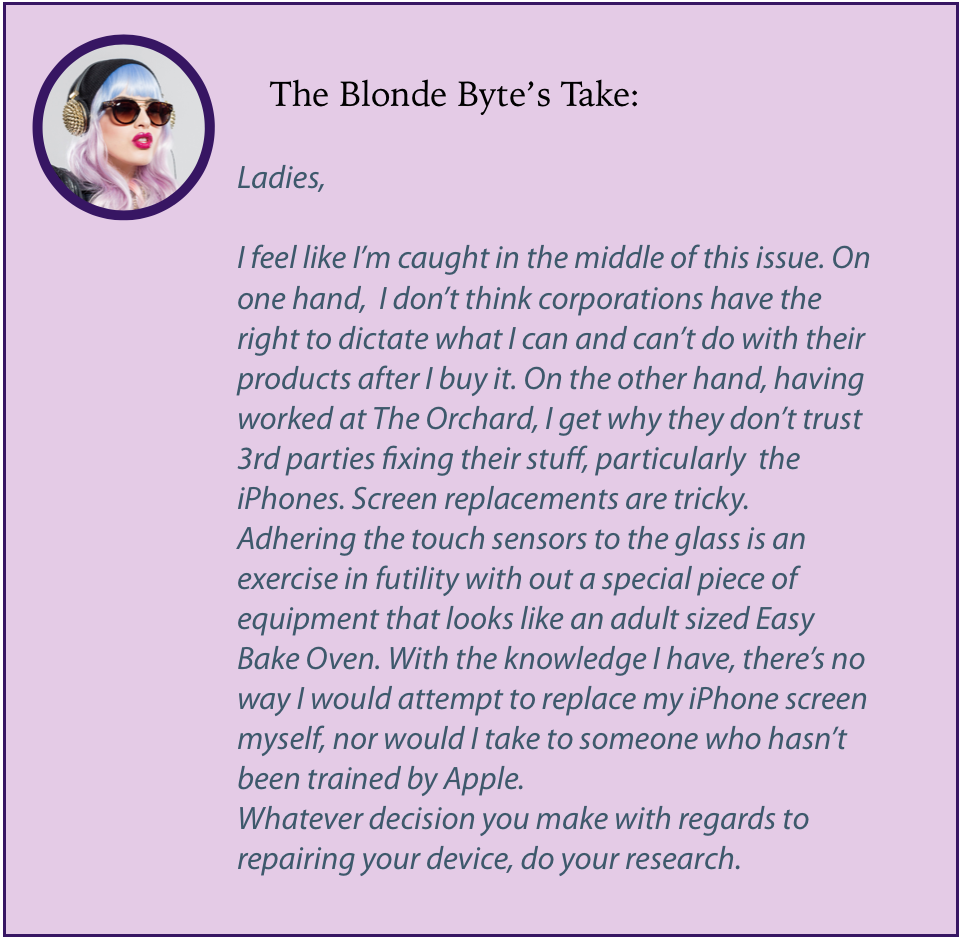 By Adrian Kingsley-Hughes of ZDNet

Despite several states introducing Right to Repair legislation to help make it easier and cheaper for people to repair their broken electronic devices, companies such as Apple and Microsoft are hard at work lobbying to prevent such laws from being passed.

So why are companies such as Apple and Microsoft so against you having the right to repair your broken devices?

The popular belief seems to be that the reason why companies are opposed to people being able to fix their own devices is money and greed. If your device is broken then, haha, you have to go out and buy another, so cha-ching. You get the chance to empty your wallet and the company makes another sale, and the consumer capitalism machine continues to march forward.

But it’s not all about money and greed. No really, stop laughing, it isn’t.

The popular belief seems to be that the reason why companies are opposed to people being able to fix their own devices is money and greed. If your device is broken then, haha, you have to go out and buy another, so cha-ching. You get the chance to empty your wallet and the company makes another sale, and the consumer capitalism machine continues to march forward.
But it’s not all about money and greed. No really, stop laughing, it isn’t.

But rather than looking at money in, think of money going out. Dealing with authorized repair centers that employ trained technicians is much easier and a lot less hassle than handholding Jo Public armed with a chewed up Philips screwdriver through an iPhone repair.

The sort of repair documents that companies supply to a competent technician are going to need to be very different to what they’d have to supply someone who’s never taken a device apart before. An expert might be happy with a phrase such as “refitting is the reverse of removal,” but a beginner is going to want a screw-by-screw rundown of how to put something back together.

Then there’s the whole liability side of things, and who is liable when things go wrong. Modern electronics are difficult to take apart, and most of that difficulty isn’t deliberate, but a side-effect of people wanting things that are small and light. While you can stick your whole head inside a big desktop PC, laptops require you to have nimble fingers, while smartphones and tablets force you to use tweezers and tiny probes for jobs. Then there’s having people navigate around glass and lithium ion battery packs, and having to use sharp tools, all of which offer bounteous scope for injury and dismemberment.

Even when a company total and 100 percent disavows any liability for someone getting a shard of glass in their eye, jamming a screwdriver into their femoral artery, getting a heart-jarring zap of current, or burning their eyebrows off in a lithium ion explosion, that sort of thing can generate a lot of bad press.

Same goes for people using crummy third-party parts for repairs, or causing damage to sensitive components. If a device that’s been tampered with blows up downstream, it can again stir up a lot of bad press.

I’m a big supporter of people fixing their own stuff, but that’s also tempered by the fact that I’ve seen plenty of disasters where someone’s tried fixing something, made a huge mess of it, and then hands that disaster off to someone else — me — to repair. People — usually through having the wrong tools — can create a lot of mayhem, and turn simple jobs such as a battery or screen replacement into an expensive job.

Sometimes it’s not only just easier but it’s cheaper to hand these routine jobs over to someone who does them every day (especially if special tools are required). They have the tools and the know-how to do it efficiently.

There’s an old saying in the automotive trade — here’s my hourly rate, and it’s double that if you’ve already tried fixing the problem yourself.

My take on why companies are spending money on lobbying against Right to Repair legislation is that they want to send a clear and definitive message to both the public and lawmakers they don’t support people messing around inside their devices. Period.

As I said I’m a firm supporter of people having the right to repair, but I’m also pro people being clear on what they’re getting into and being aware that sometimes a professional repair might be better. YouTube videos and how-to guides can make things seem easy, but when you’re dealing with old devices, crusty fasteners, and any damage, things can head for the tarpits in short order.

I also fully support Right to Repair legislation, but it would be good to see the narrative on why companies oppose it change from “greedy companies what more of your money” into something that’s closer to the truth.

What’s your take on The Right to Repair? Tell us in the comments below!