The problem becomes exponentially easier to solve once you’ve begun to solve it. 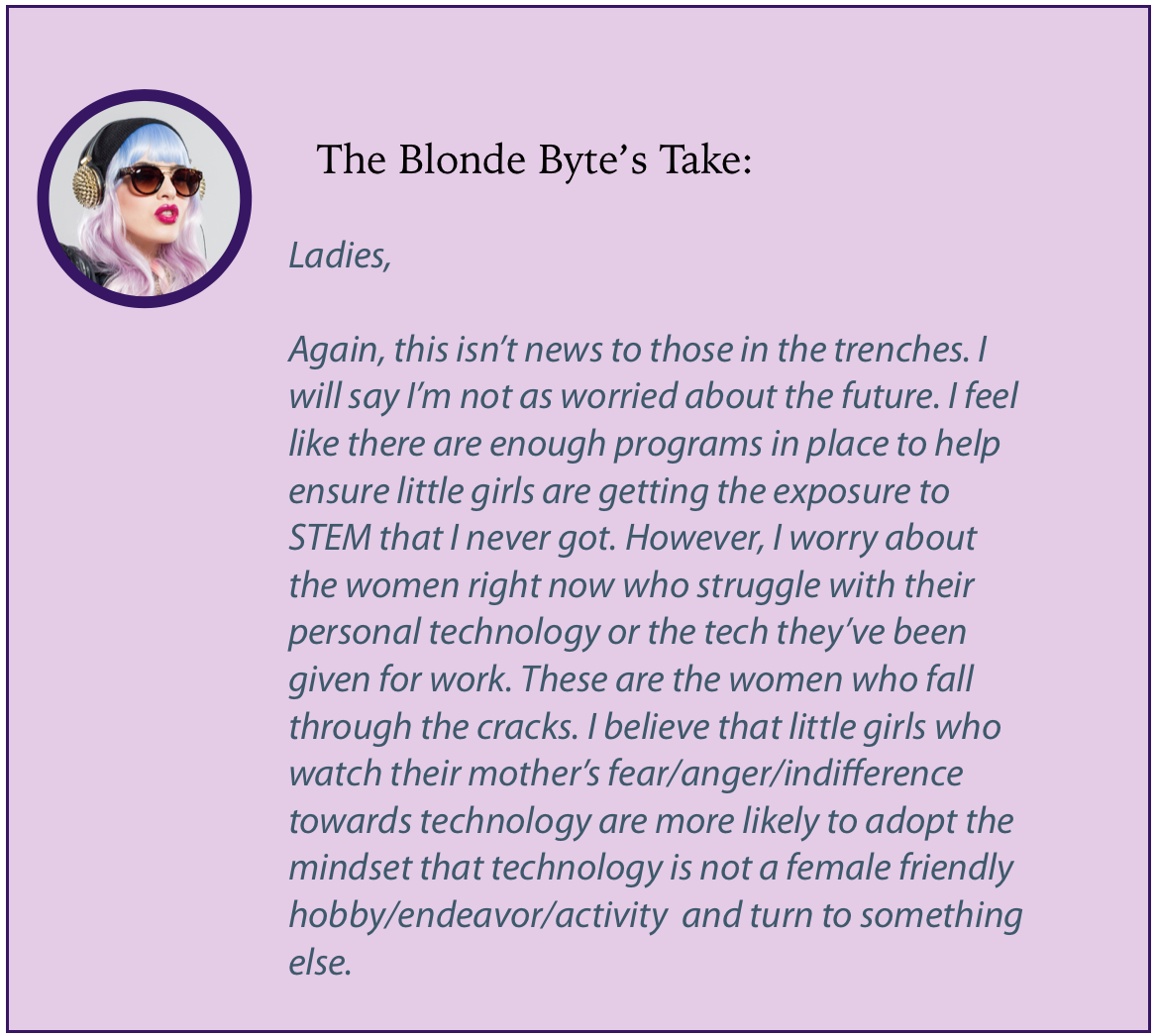 By David Yang and Nimit Maru of Recode.net

While the United States is seeing more women in leadership positions within politics and even classic old-boys-industries like finance, the tech sector can’t say the same. More startups than ever — 70 percent, to be exact — have absolutely no women on their boards of directors, and the same is true for their executive-level employees: More than half of all startups have entirely male executive teams.

And when we drill down to the computing sector — where are nested the kinds of jobs we train students for — the numbers are even more dire: The percentage of computing occupations held by women has declined sharply since the early 1990s, when it peaked at just over 35 percent of occupations held by women, despite the fact that slightly more than half of all college grads are women.

So what does this tell us? It tells us that our current efforts either aren’t working or aren’t being applied on a grand enough scale.

We need to start earlier.

We need to get everyone on board. “Diversity and inclusion,” while incredibly important as an initiative, can’t be viewed as merely that, a siloed initiative that happens in parallel with the same old ways of doing things or is overlaid at the end of projects to make sure everything looks kosher to outsiders. It has to be interwoven into an organization’s protocols.

Women, for example, have to feel comfortable being emotional in workplace conversations and not feel like they can’t bring that part of themselves to the job just because men are taught to operate that way. The default way of conducting business can’t be the “male” way.

Minorities have to feel that micro-aggressions will be taken seriously and not written off as “sensitivities” or “overreactions.” And companies have to go beyond “token” employees — because hiring only one woman or one person of color can be exhausting for that person and cause them to leave. It comes down to this: Companies can’t work toward moving the needle on big issues and then gloss over the small things.

Those little, interpersonal things add up to company culture, no matter what the values on the website say, and it’s precisely the day-to-day concerns that will drive women and people of color away, no matter how much energy a company puts into big-picture efforts.

We also need to come to a cultural understanding that the opposite of systematic disadvantage is systematic advantage. Though that seems obvious enough, initiatives like the Grace Hopper Program, which offer benefits exclusively to women, get a lot of pushback from men (and women, surprisingly enough) who see these policies as “sexist” and ultimately damaging to women, sending the message that women need a helping hand and undermining the idea of women as independent and just as strong as men. But the truth is that women do need at least one helping hand in light of the many hands that have held them down for so long. It’s one thing to say that women aren’t inherently less capable; of course they aren’t. But it’s essential to recognize that society has enforced handicaps, and women’s inherent abilities aren’t the only factors at play.

We’ve seen these same arguments against systematic advantage in the affirmative action context — that built-in preference of historically disadvantaged groups is somehow damaging to those groups. But you won’t see those who argue against affirmative action or scholarships for minorities or deferred tuition for women also arguing against the tacit advantage that majority groups have had for centuries, if not millennia. And that’s because the adage is true: When you’re accustomed to privilege, equality feels like oppression. Majority groups that have been unfairly advantaged for too long see any even minute reduction in that unfair advantage as an all-out attack.

We know that initiatives like the Grace Hopper Program’s deferred-tuition model — where women train now and pay only once they find full-time, in-field employment — work. Take Leila Loezer, for example, a Grace Hopper grad originally from Brazil. She came to the U.S. in 2008, and after reading about our unique tuition model in the Women Who Code newsletter, completed our program and was ultimately hired by the New York Stock Exchange.

So it’s on all of us, but especially organizations with a strong following, a wide reach and high-profile leadership, to articulate both the general need for and their specific support for systematic advantage as a tool to combat systematic disadvantage. In this way, we can scale up these efforts — because more women in the industry naturally begets more women in the industry, and the problem becomes exponentially easier to solve once you’ve begun to solve it.

A study from 2016 revealed that 85 percent of jobs are filled via networking and referrals. When both your team and the industry are majority male, you can bet your referrals are going to be majority male. So the snake eats its tail and the problem proliferates.

But when women — who have likely found support in small, women-friendly communities like Girl Develop It, Women Who Code, Black Girls Code, etc. — join your organization, suddenly your pipeline includes those very targeted groups. And more importantly, when many of the women from those groups see your company as more friendly and more accessible — you already employ a woman they know — they suddenly have a chance at employment that they didn’t have before.

What do think needs to be done in order to get more women into the Tech world? Tell us in the comments below!