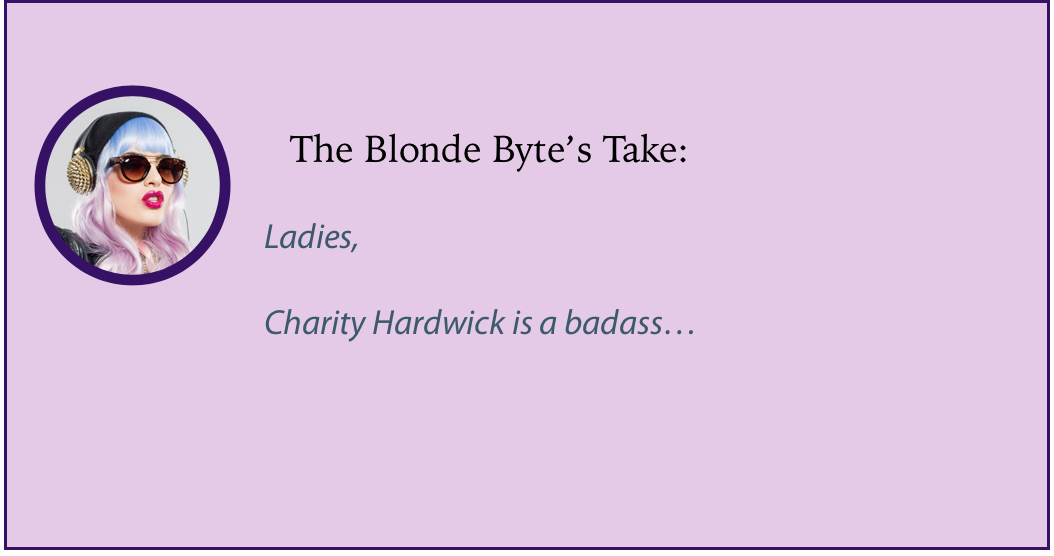 By Manon DeFelice of Forbes.com

Standing out as one of the few among just 5% of women who hold an executive position in the male-dominated audio industry, Charity Hardwick has an inside view on what it takes to get to the top. Hardwick recently earned the title of president at Soundcast, one of the leading outdoor audio companies in the consumer tech industry.

Handpicked by former Soundcast president and CEO Oscar Ciornei to ring in the next series of Soundcast releases, Hardwick has followed a circuitous career path that ultimately unfolds into a unique rising-star story. (And like so many heroes, she’s also a mom.) I connected with Hardwick to hear her thoughts about what women need to do to break into the tough world of tech—proving their mettle, busting through stereotypes, and persevering, like she did, against unlikely odds.

Manon DeFelice: How did you get where you are today as a rare woman in the consumer-tech executive sphere?

Charity Hardwick: When I was a child, I was enamored with the Bewitched TV show. I didn’t want to be a nose-twitching witch, however—I wanted to be Darrin Stephens (sans alcohol problem). I wanted to be an executive solving brand challenges with creativity and the flexibility to work out problems in new ways.

More than anything, I’d love to share a story with other women and underrepresented workforces that contains some sort of magic formula—a path to becoming successful and breaking the glass ceiling. Truth is, it’s not magic, or easy, to work one’s way up through the ranks in any industry, let alone an industry dominated by men.

Along my path, I often wondered how a career that began in the military, in the medical field and ran the gamut of finance, real estate, outdoor sporting goods and finally, technology, could possibly add up to an actual point? Sometimes we won’t see the point until much later. Tenacity will reveal the point. Not every day is a win and sometimes the small magic that can be claimed is simply not giving up that day.

DeFelice: Can you give us a peek into the future of high-fidelity audio? What’s new from Soundcast?

Hardwick: Soundcast has been creating award-winning wireless audio systems for over 10 years now. First to market with a complete outdoor-designed audio system, we have now released an entire line of micro to huge portables suited for the outdoor and on-the-go lifestyle.

As a company made up of musicians and audio fans, we are committed to best-in-class audio supporting hi-res files from any source, whether that be pairing with existing indoor systems to create an outdoor zone, streaming music from a personal audio device, or adding it to an Alexa control or Sonos indoor wireless streaming network.

We’ve released the VGX Series of products this year to provide flexibility for the backyard or on the go that achieves gorgeous ambient music or bass-busting party music. Music fans today realize that they shouldn’t have to sacrifice quality to listen to their music in wet, sandy or messy situations, and we agree.

DeFelice: How do you reconcile motherhood with a busy career?

Hardwick: In her recently published book, Pick Three, Randi Zuckerberg suggests that in order to be really successful one has to sacrifice something—whether that’s work, sleep, family, fitness or friends. She argues that one can’t keep up with more than three of these areas and be highly successful. I’ve seen men boast that they can get a job like this done in 40 hours a week with plenty of time to spare. But to be a successful woman in an industry that’s predominantly male requires women to exceed all expectations; that requires massive hours and effort to perform. Couple this with motherhood and I’m surprised I can pull off more than “pick two” on the Zuckerberg list.

Motherhood isn’t a burden; it’s a unique advantage that I’m given. We mothers stay tuned in and sensitive to the needs of others, can multitask like nobody’s business and exhibit the most incredible depths of loyalty and strength . I’m thrilled to be modeling behavior for my daughter that she can take in any direction she chooses. Whether that is conquering the world, or painting it—she’s going to know she can do it.

DeFelice: What do you do to keep your company women-forward and family-friendly?

Hardwick: As a company, Soundcast is focused on three things: quality, professionalism and fun. If we’re going to accomplish those things, we must be supporting the individual and family in the best way. For those who need them, we offer flexible work hours and remote work (we have several employees working around the globe), and we celebrate each other and our families here.

I’ve heard it said that you can teach an employee a skill or an industry, but you can’t teach an employee to care. Care is modeled behavior; when a company shows care, we foster care. When care is fostered, the beneficiary is not only our own company but our customers as well.

DeFelice: Can you share advice with women who want to succeed in the male-dominated world of tech?

Hardwick: The only barriers that stand in the way are the ones that we allow to be created around us—the ones we accept . As a female executive in the CE/Audio industry, I look around and I’m missing the representation next to me that gives voice to the needs and language of a huge segment of customers that is not being fully acknowledged. It’s up to us to challenge that.

Support and solidarity is hugely important for women in tech as it may be easy to find oneself becoming isolated or marginalizing one’s own experience and potential. I have a strong group of accomplished professional women in the Women in Consumer Technology group who I receive support from.

There is true opportunity for women here—women who do not accept the assumptions or criticism of their peers as it’s doled out through an outdated and narrow perspective. Embrace those terms that others reject—terms like abrasive, directional and headstrong. It’s when we break through this insecure criticism from peers that we can rise to the next level.